Warren Haywood kindly dropped off my J79 on Tuesday evening having weaved his magic on the paint job. I need to glaze it add the backhead etc.

Having checked my reference books I also need to add the loco number the the front buffer beam – neither of us were certain it had one when Warren was doing it and I only checked after the event.

This afternoon saw the injectors fitted and all the bits assembled.

Finally a couple of the injectors in place although not 100 percent accurate they look the part.

A weekend at home in Wakefield for a family event has mean’t extra time to crack on with the J71 which is almost there now.
Like most classes of locomotive, the J79’s had a wealth of details over their life. a couple were Westinghouse fitted but 1662 was vacuum fitted in later life (it retained the steam brake for the loco braking) and the vacuum pipes were the under buffer plank hanging type rather than the more common upright variety.
The pipe ran down the bottom of the valance on the right had side of the engine and the mounting brackets looked quite substantial. Initially I made my usual mounts from scrap etch folded in ‘P’ shape but they just didn’t look right. After a rummage in the box that I keep all my rod and strip sections in I came up at a loss and it wasn’t until looking in a drawer for something else that I chanced upon some short lengths of bullhead rail.
They seemed perfect from an edge on view so a couple of attempts to get the right length later and I had 4 mounting brackets. To make them I drilled a hole through the web and then cut the from the back through the web like this

I also drilled a hole in the roof and filed it square for the roof ventilator then cut a scrap of etch for the cover. To get it to sit at such a jaunty angle I popped a bit of thich scrap etch under it at one end then gripped the other with a pair of self locking tweezers. turn it over and touch the soldering iron inside the hole for the ventilator and its firmly held in place at an angle.

The remaining whitemetal body details were then fixed in place with epoxy and thoughts returned to the chassis.

Not included in the kit but very visible on the sides of the chassis are a couple of injectors. A search through Laurie Griffins site didn’t reveal any that looked remotely suitable so I decided to make my own from brass tube, rod and some 14BA nuts with copper wire for the pipes.

Steady progress this week has seen more details added to the body.

I also added the front lamp irons (Laurie Griffin castings) and the bracket on the front buffer plank which is visible in the photos that I have and Yeadon speculates that it was used for shunting locos/tenders when separated from each other. This was made from scrap nickel etch soldered together with 295 degree solder so it stayed together when I used 145 to add it to the buffer plank. – again a few more Scale Hardware items to finish it. – The eagle eyed amongst you will note that one went missing while washing it too…

The hand rail on the fireman’s side has a fitting that incorporates the support for the end of the handrail on the smokebox this was made up using some small bore tube, a disk of scrap etch and a 14BA nut. The tube sealed with the scrap etch was slid onto a stub of handrail protruding forward of the hand rail knob with the nut at the other side and all soldered in place. It’s not strictly accurate but it will pass muster once painted and is better than just a plain handrail knob.

It was discretely pointed out that the coal rails were plated right to the bottom and it for me it was a wood and trees moment because all my photos show it but it hadn’t sunk in.

Remedying it involved taking the rails off again because try as I might I couldn’t get the extra strip to stay in place while I soldered it while it was in situ.

The same discussion concluded that being vacuum fitted it probably had an upper rear lamp iron too. Scrap etch to the rescue. This was the second attempt because having made a lovely job of the first which was made from conveniently shaped bit of etch I realised that I had the slope rising up above the horizontal rather than below it as it should be.

As a bit of a distraction while painting other bit’s and pieces, I primed and topcoated the Backhead. Over the weekend I picked out the details and added a bit of weathering.
Although I am not sure that the photos do the quality of Jim’s little backhead for this loco, justice  – what you see is all cast on the backhead with no additional pipework or castings. I was so impressed that I thought it would pass muster inside a closed cab without resorting to removing and re-adding details as I might have done with other backhead castings.

A session last night saw further details added to the body.
The coal rails were fitted and a plated infill added. My reading on the subject has revealed that they were plated over right from being built. Jim supplies them as open rails. A piece of scrap etch provided the infill.

Handrails both sides were fitted but they needed bushing with a bit of tube over the base of the handrail knob to fill the slightly oversized holes  – of course I then had to enlarge the holes again to get them to fit with the tube in place.

In the instructions (like many of his kits) Jim suggests the use of split pins instead of handrail knobs. For the J79, looking at the photos I have, it seems that handrail knobs are a better fit to the real thing than split pins would be.

Finally the piano front was fitted after filing a piece of rod in the Dremel to make the quite visible knob for it.

The last couple of evenings have seen more details added to the body of the J79
It now sports Clack valves, the safety valve bonnet, a front lamp iron on the smokebox and finally a connection and pipe to the tops of the firebox.  I am not certain what this is exactly but noticed it on a recent photo posted by Mick Roffe of the preserved J72 too.

A weekend at home has seen much progress on the J79.
The chimney and safety valve cover are just posed for the photo I want add more detail before fixing them in place.

The cab is still loose at this point too.

This is the reason that it’s still loose, although at an oblique angle one of the photos that I have seems to show bars on over the rear windows which I have added – suitably distressed too.

Since taking this shot on Sunday morning I have made up the vacuum ejector pipe and soldered the rear of the cab in place.

There is a lot going on for such a diminutive little loco
Work has progressed a little this week with me adding the cab beading and fitting the cab/bunker/tank sides to the footplate. I took a bit of care to make sure that I got the sides to the outer edge of the etched slots in the footplate – this is an older kit and some of the slots are slightly over etched.
I then looked to fit the bunker rear and found that there is a slight gap at one side so I am probably going to have to adjust the left hand side as you view it from the rear. that may mean that I need to fill a small gap in the footplate top time will tell.

It was getting late by the time I discovered that so I moved onto something a little easier for my last 15 minutes or so. Namely the cab roof. I am quite impressed by Jim’s design for this because it’s usually a bit of a fiddle to get it to sit square and be retained in the cab. Jim’s answer is a nifty fold up etch.

A note to anyone building one of these, there are half etched curves in the roof for locating the rain strips (the idea is that you solder in a length of thin wire and it becomes a half round rain strip). when rolling, the roof has a tendency to fold rather than roll smoothly. Backing it with a bit of card as it goes through the rollers would probably help with this.
Having none to hand I didn’t bother,  I just stopped passing it through the rollers right to the ends of the roof and effectively just rolled the middle section. I also replaced the wire with some small square section rod that I had in stock.

Lastly in true Blue Peter fashion,  here’s a bit that I did earlier. I had previously added the spacers and the boiler bands to the boiler but had popped it back in the kit box so missed taking any photos of it when I took the photos that I shared the other day.

Now that the B16/1 is finished I thought I would share with a you a little distraction that I had a couple of weeks ago.

I had a few days off after my birthday and wanted to spend it working on something for me. I really should have spent the time working on my MOK 8F kit but I didn’t instead I made a good start on the J79.
Jim’s kits are great in that you can build them as supplied and have a lovely model or you can go to town and have an even better model. I chose to not only raid the spares box but to do some scratch building as well.
This is where I got to during the 4 days that I spent on it.
First of all I built the chassis. I decided I wanted something a little more 3D for the loco springs and after raiding a few of my kit stock to see if I could borrow anything that might be suitable I ended up making some from scrap etch, nickel rod and some 12ba nuts

The centre axle holes have been elongated downwards and sprung with a piece of 0.8mm piano wire which sits into a dimple drilled in the bearing.
The lovely brake castings are from Ragstone Models and were bought originally for my A3 but there wasn’t enough clearance to use them so they were sat in the spares box and matched the etches perfectly so it made sense to use them.

While at Guildex was enquiring as to the availability of coupling rods for the N2 etches that I picked up from the E&T and noted that they had a table at the side of the stand which had boxes of castings of various descriptions at quite silly prices. Apparently they had cleared out their workshop and they were all part used sprues of lost wax castings most were at £1 or £2 per bag and I got quite a few for about £12 in total. Some of these were lamp Irons.
I made use of them on the bunker rear 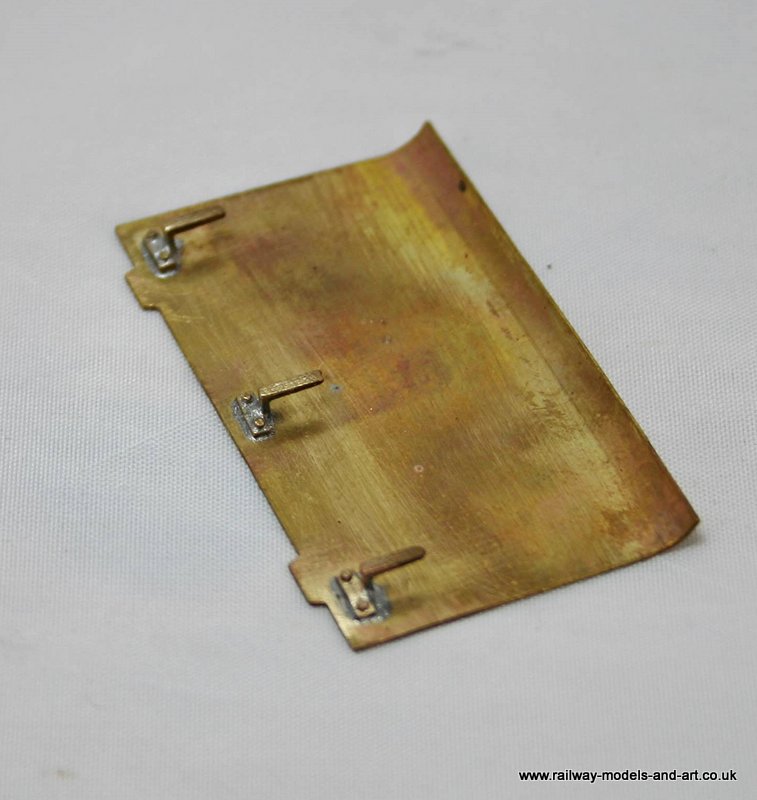 To make them even more secure I drilled through and attached them via the spigots too.

The coupling rods in this kit are brass etches and Jim helpfully suggests tinning them to make them look like dirty steel rods. I have used this tactic in the past and it does work.