Skip to primary content
Skip to secondary content
Back at the beginning of last year (February) I built a Powsides ex GER 5 plank open. This was an E&T buy at Telford about 3 years ago.
Warren primed and coated it in grey for me and I have finally got around to adding the transfers ready for some weathering. I must have done a bit of weathering/painting of the woodwork but I can’t recall when… 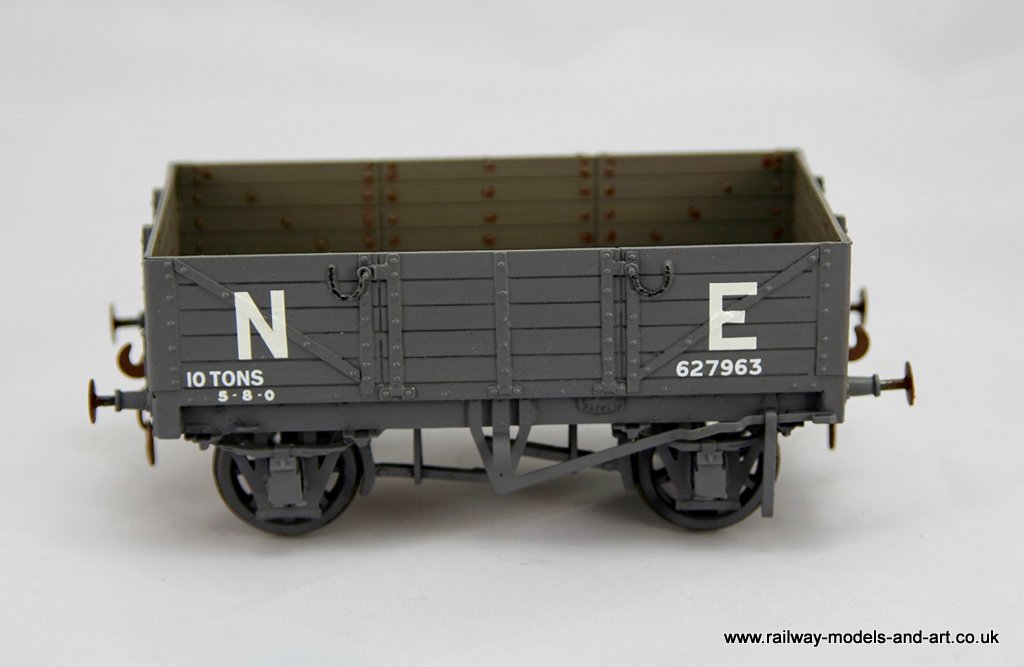 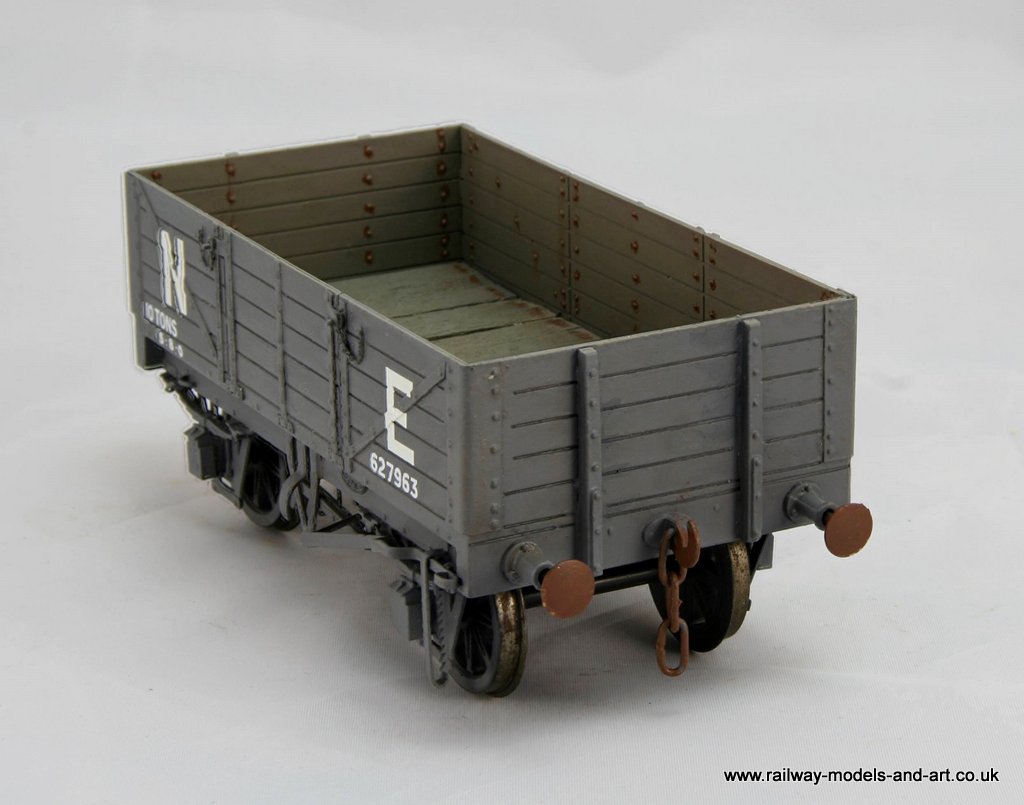 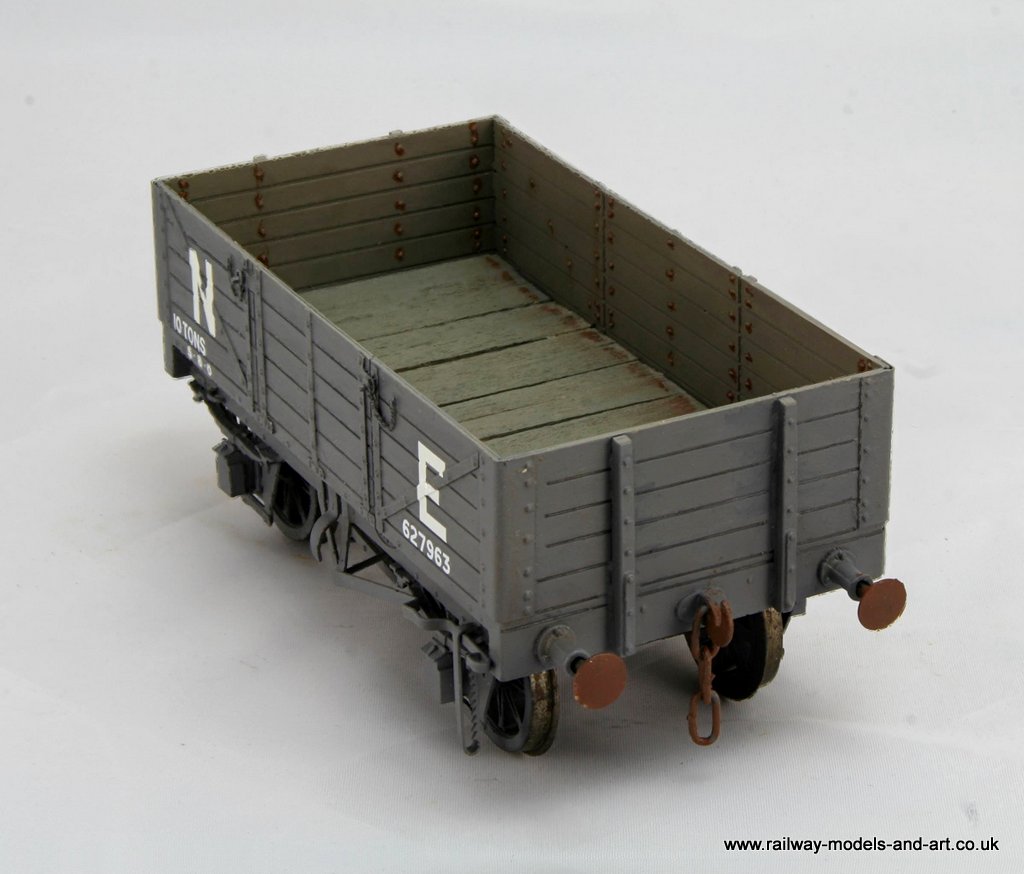 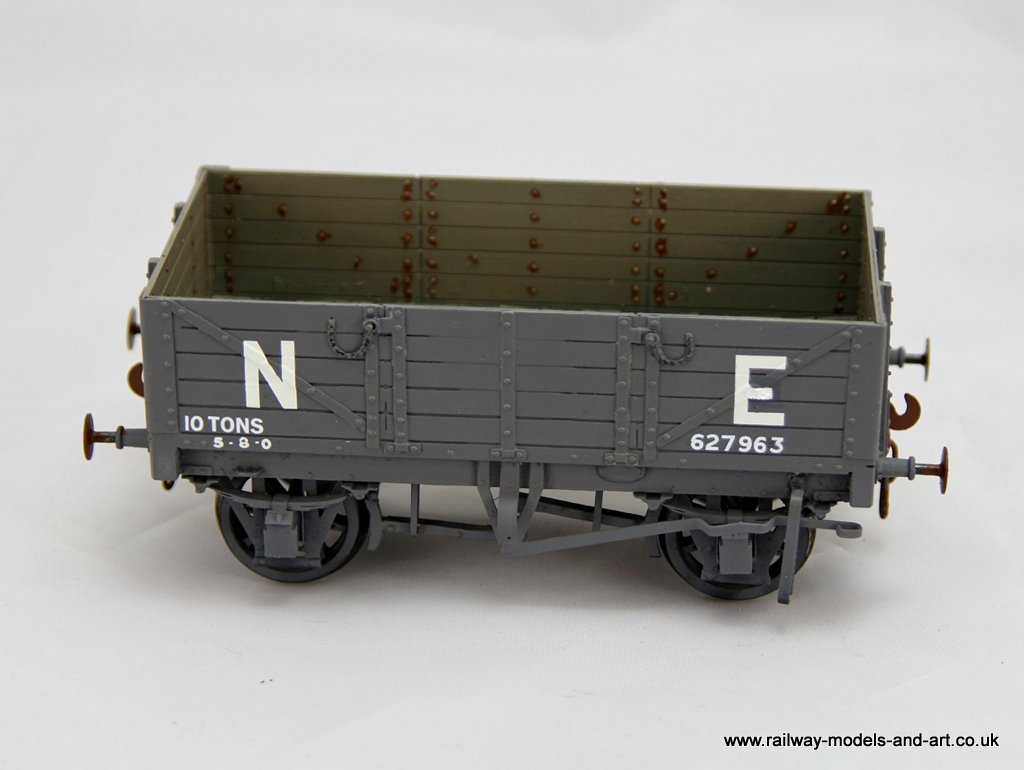 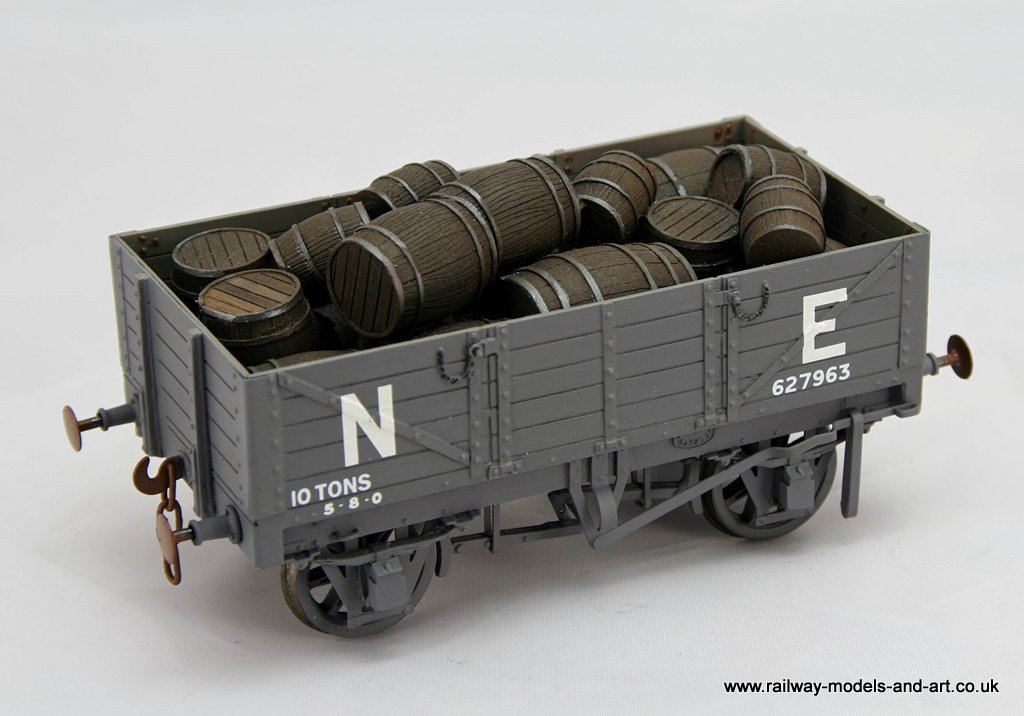 The last shot has it’s load which is one of the Skytrex castings that I bought and painted two or three years ago.

Isn’t it always the way? You look at the photos and realise that you have missed something. In this case it was the pins and chains for the side doors. 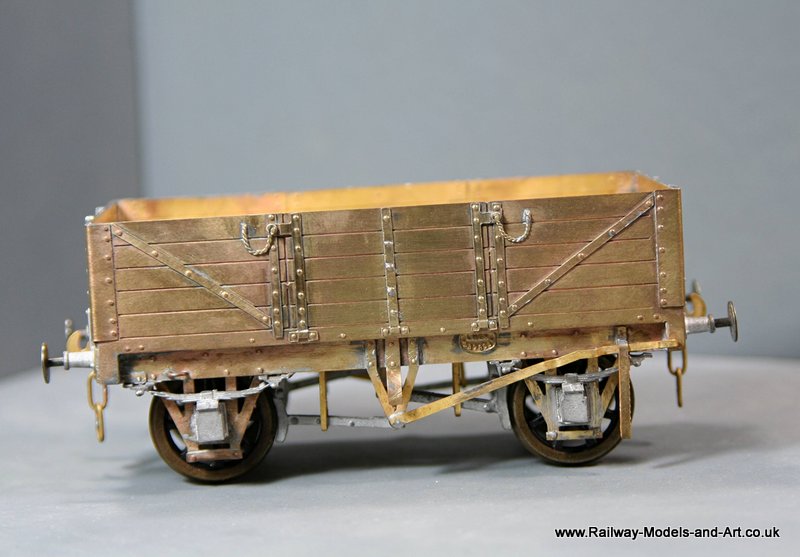 I got the second NER Birdcage brake to a similar state as the first one – just needing buffers and working out how best to fit the roof post painting. 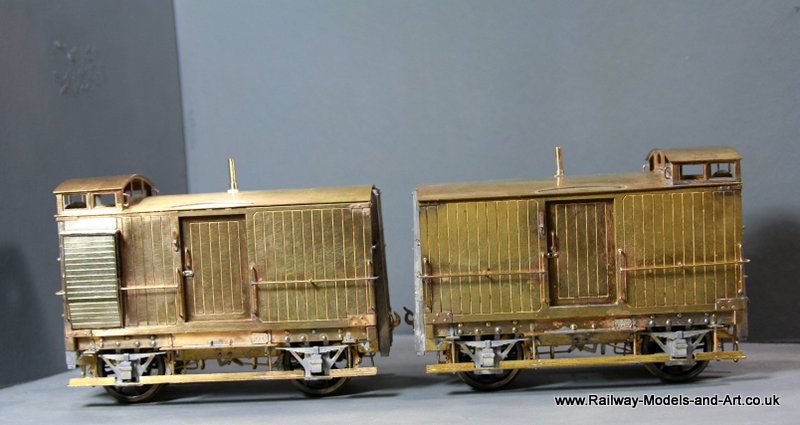 And then something that came together almost as a surprise.  As I was doing the two V1 vans I started to clean up and make the various folds in a V4 van and before I knew it, quite a bit was to was ready to solder up. 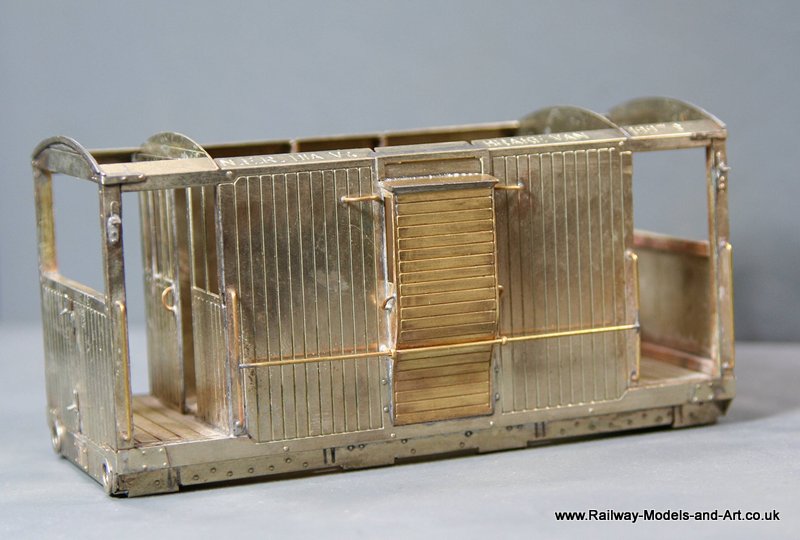 The doors are sliding doors and the way that Jim has portrayed them made leaving one of them partially open almost irresistible. It means that I will need to model an interior but that doesn’t faze me. 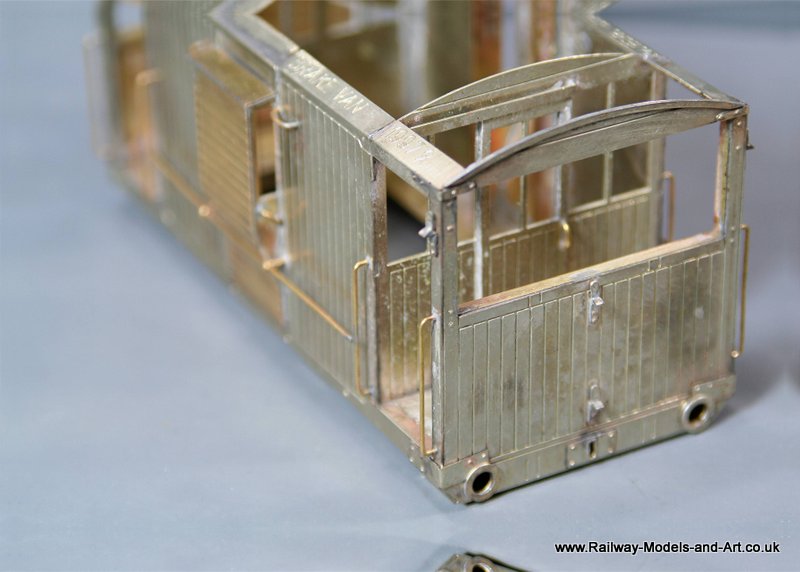 Again it’s a Connoisseur kit and to that I have added square brass rod to beef up the vertical and horizontal framing and some internal planking to the veranda ends. 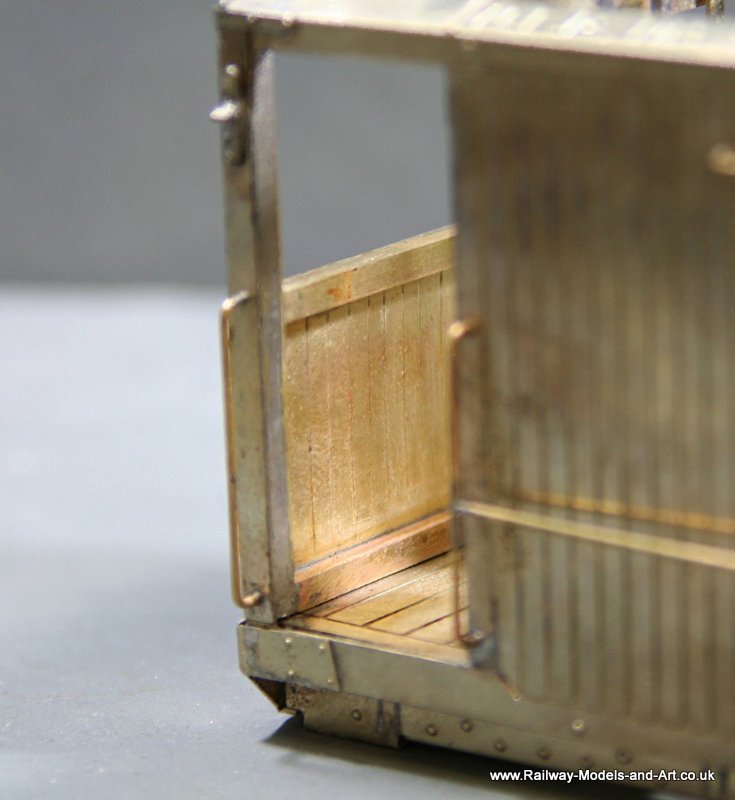 It all needs a good clean up before I go much further with it.

Aside from doing some detailing work on another Kirk coach, last weekends task was to add transfers to the various Parkside builds that I have been working on recently.
Starting with the LMS Beer Van. 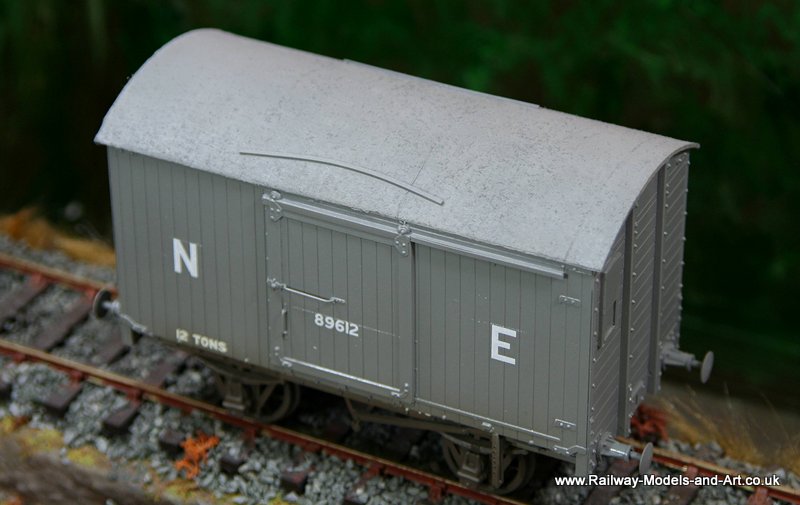 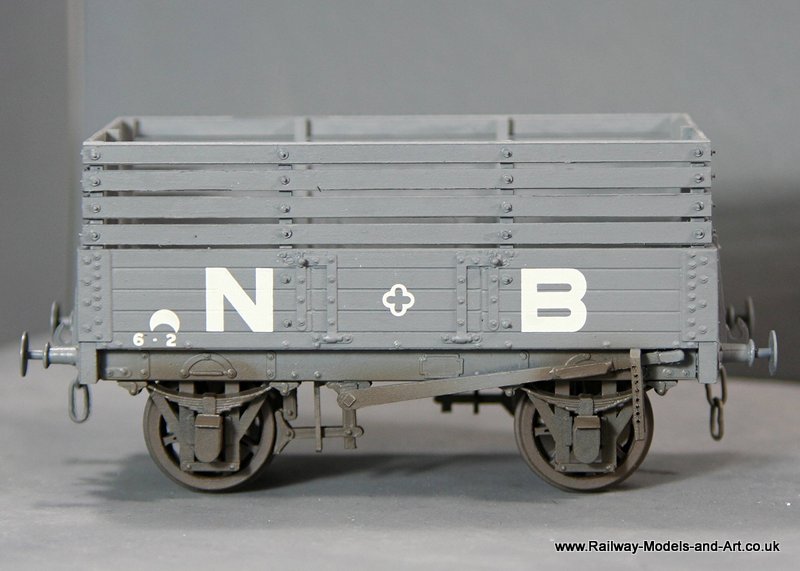 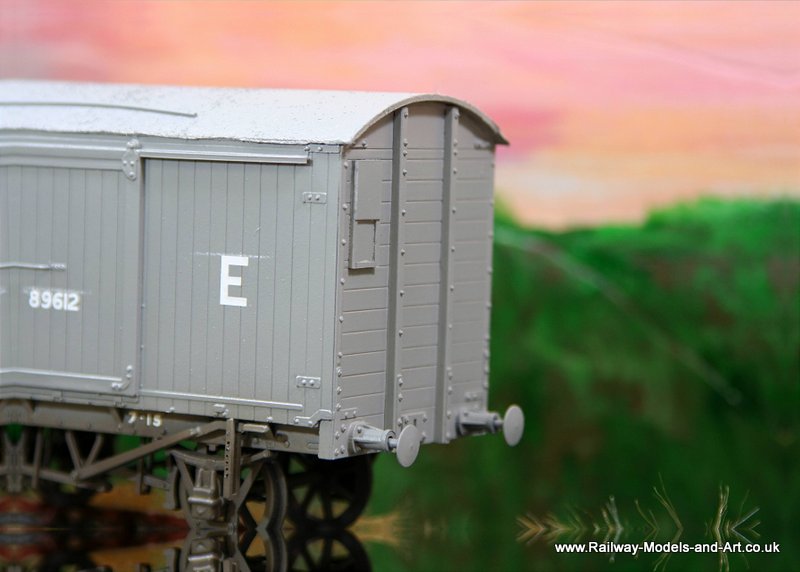 Time for an update, seven days away from TV and internet have allowed me to crack on with quite a few of my ongoing projects.
First up I finished the remaining three Parkside Vans ready for painting – actually I tell a lie because the LNER fish van still needs guard irons and vac/steam pipes.

Then I built a Slaters Gloucester 5 Plank Open. Unlike my previous builds of open wagons I haven’t gone to town on the interior detailing on this one – I went as far as scribing in the plank lines because I plan to load it in such a way as the interior won’t be seen.

Then I built a Parkside NBR 4 plank open and while looking in Tatlow for the additional details that I had added to the last one of these that I built, I noted that some of these wagons had been converted for use as Coke wagons. Variety is the spice of life as they say, so of I went with the styrene rod and sheet – it was actually great practice at cutting straight strips from 1.25mm sheet.

Despite being a simple kit bash it allowed me to indulge in adding bolt head details and by dint of good fortune I just had enough styrene washers to hand to complete it.

All in all they were worth taking a punt on.

At the Guild summer show I collected some kit’s that I had reserved with the E&T service.

In amongst them were some Colin Ashby PO wagon kits in between doing other builds I have slowly been putting them togther.

First a note from Colin that was included with the kits.

This makes the kits quite ancient history but that said the detail is pretty good for the age of them.

I have included some of the missing internal washer plate detail but quite a bit was there to start with on the internal sides. 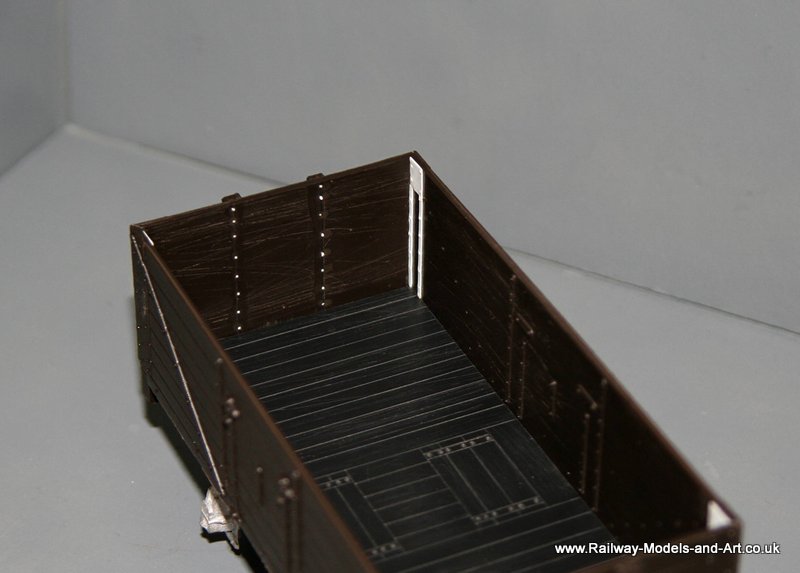 I did have to scribe the floor detail though – which is a reverse of some Slaters kits which have planks on the floor but no internal side detail. 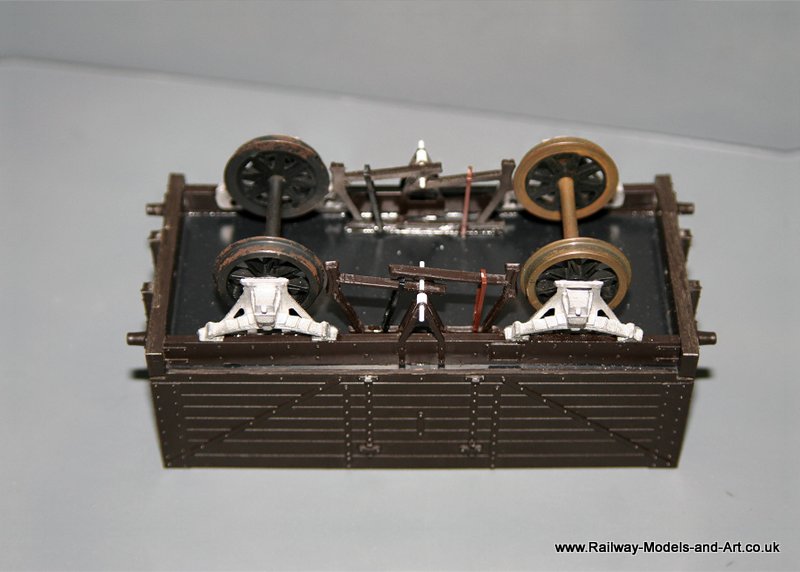 I also had to raid the spares box for the brake safety loops indeed not having enough I had to cut some from styrene sheet.

The brake levers and guards were one piece mouldings which I will replace with a mixture of Slaters/Parkside and Bill Bedford etched spares.

Overall I am quite impressed with them, the only minor discrepancies are that they seem slightly longer than the equivalent Slaters 7 plank wagon and the moulded buffer bases. The size I can live with but I am undecided about the buffers at the minute – the heads were plastic so either way they will get replaced.

Despite having failed miserably with the tar tank transfers I had more success with the NBR open.
To ad a little variety I decided to do this one in NBR livery – according to Tatlow it seems that quite a few NBR wagons made it to the mid 30’s still in NBR livery (that and I have a few sets of NBR transfers and it would be a shame not to use any of them). 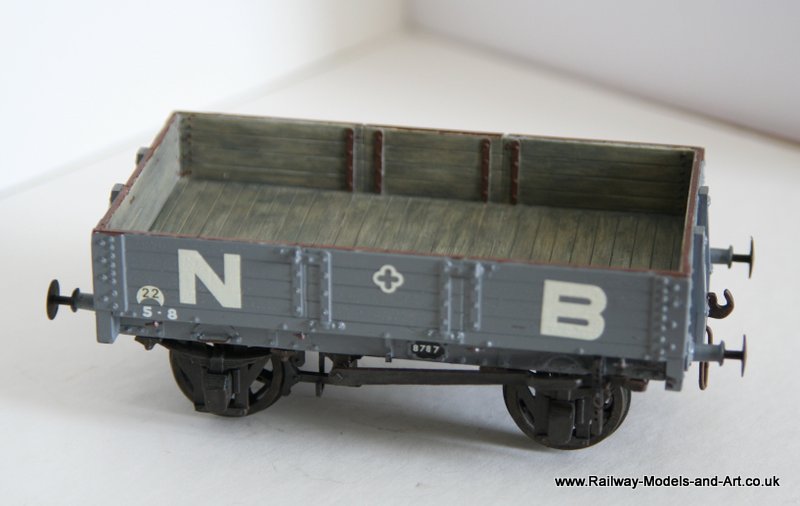 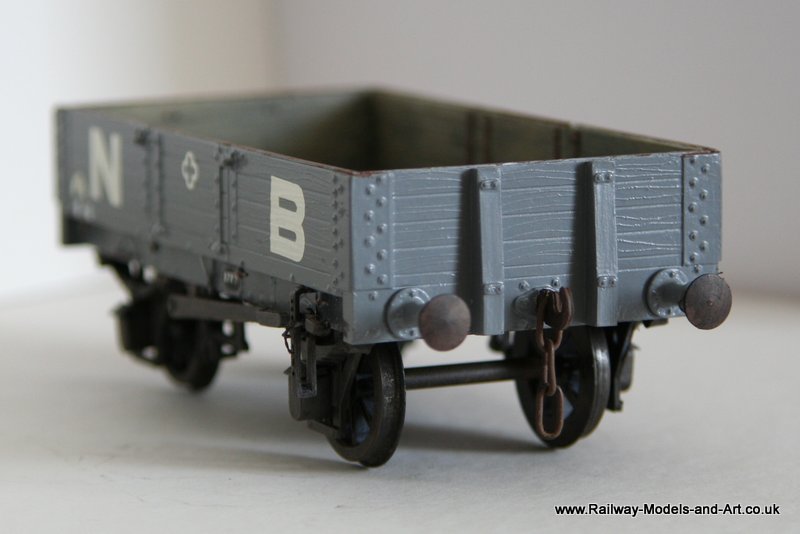 Further following the photo in Tatlow I even managed to find some small enough black transfers to add the paint date in the crescent. 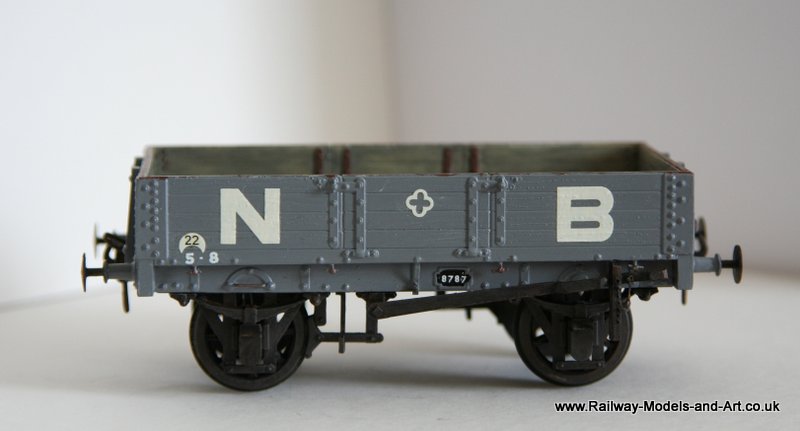 I have tried several methods to get weathered but unpainted wood for wagon interiors and this is the one that I am most happy with so far. I had an exchange of emails with Bob Alderman after seeing his superbly weathered cattle wagon on the guild gallery. Bob’s suggested method was build up lots of dry brushing, this was done with various shades of bleached bone, rotting flesh etc. before being finished with a wash of much diluted Dark Sea Grey.
I just need to finish weathering the outside now, more of the same…

The final installment of the build of this wagon. The underframe details are a bit Heinz 57

The W Irons and V hangers are Exactoscale

The Axle boxes and Brake levers are Parkside

The brakes, guards and lever guard are from the kit.

The door banger is scrap etch from Parkside couplings 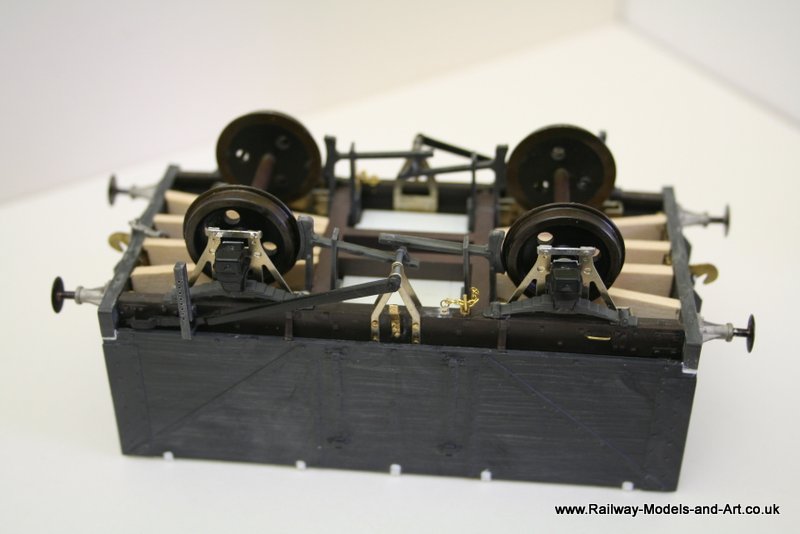 I also added some representations of the bottom doors to the underside to cover the exposed Exactoscale underframe – not that you can see it in the photos or when it’s on it wheels…..

This kit (Slaters LMS 7 Plank Loco Coal Wagon) was another of my swaps with a gent at Telford. It was one of the older kits in the grey narrow boxes and when I got it home and had a look the brass etches were missing (compensated W Irons/brake levers etc.) By pure chance a meet up with Graham Beare (of this and other parishes) on the Saturday evening saw me presented with an Exactoscale underframe to try under some cattle wagons that I am building (very slowly). It wasn’t suitable for the cattle wagons it being either too deep or not deep enough, I can’t remember now. Graham being the kind soul that he is told me to keep it anyway in case it came in for something else and it did immediately.

Having rather enjoyed the bit’s of details that I added to the brake van I decided to attempt to add the interior details that Slaters don’t include in the the kits. There is only one photo of these wagons in the Essery’s LMS Wagons volume 1 which is photographed at the end of it’s life when condemned. That said the text does refer the reader to wagons of similar diagrams which looked the same externally. One of these is a photo of a wagon involved in an accident which by good fortune gives a view of the strapping inside.

I started by using an Olfa compass cutter to measure and mark out where the planking lines were on the inside. Once marked these were deepened using an Olfa cutter to cut the grooves proper.

Then a few happy hours were spent cutting and drilling various strips of plastikard and gluing them to the wagon sides and ends before assembly. Once they were glued to the insides I drilled through into the wagon side and then inserted short lengths of plastic rod and allowed them to dry thoroughly before sanding them back to stubs. 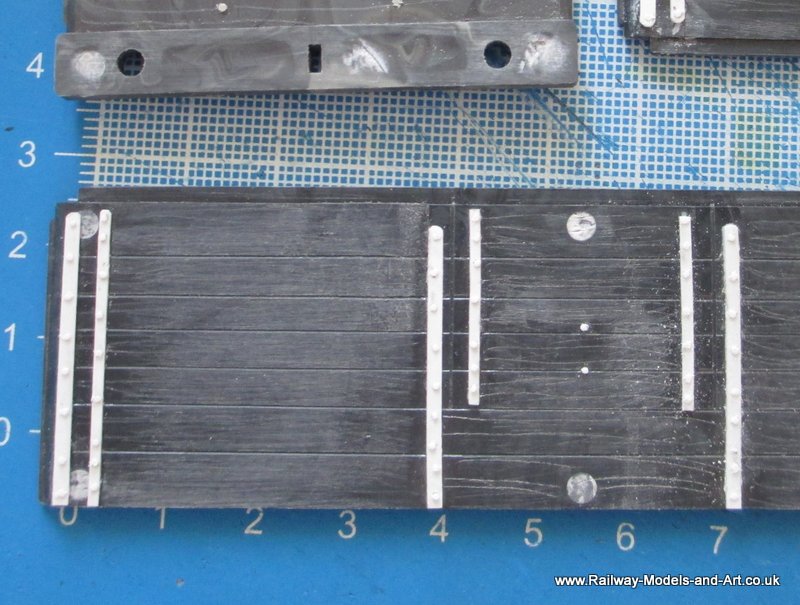 Flushed with the success of this I then decided to add the steel strip around the top of the wagon using a similar technique but on the top I cut the plastic rod of flush to give the impression of a countersunk screw. To this I then added the capping retaining clips seen on wagons – I again once glued in place I drilled the wagon sides and inserted short lengths of plastic rod before finally assembling the sides and ends. 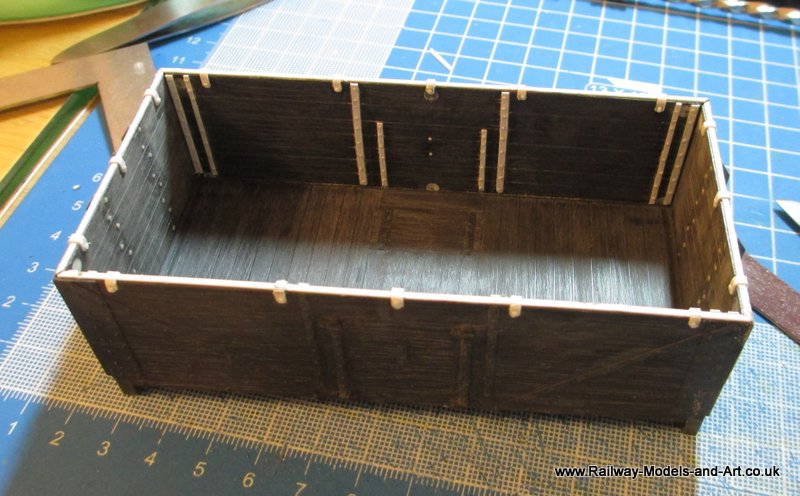 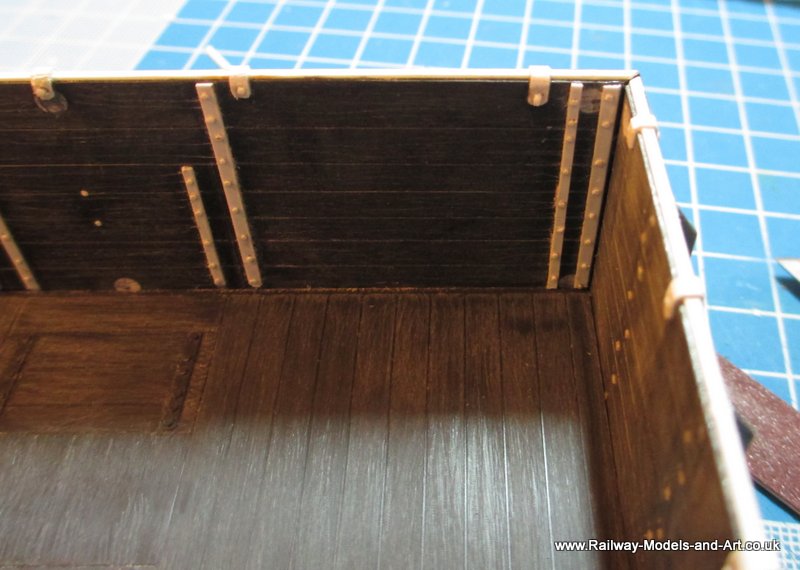