Due to having a lot on at work I haven’t been able to get back to the B16 until Sunday afternoon and yesterday.

Still good progress has been made since then with most of the tender detailing cracked. I found that the rear tender flare overlay wasn’t on straight to that had to come off and be straightened.

The coal space is still loose until I get the brake/water scoop standards in place – I figure it will be easier to drill the floor if it lifts out.

Note the longer hand rail at the front of the tender. This seems to have been a feature of a few of the B16 tenders and thankfully you can make it out on the one photo of 61450 that I have found to date.

The small steps were a bit of a fiddle but worth the effort I think.

This last weekend saw a little more progress on the Kirk coaches.

The seating is assembled for the all third and the roof made ready to fit.

Conversations on a few forums around how to attach the roof, have had the side effect of making me think about fitting passengers (which neither Don or I had considered/discussed). Due to me having already glued the floor in ( I won’t do that on future builds) I was exploring unobtrusive ways that I might make the room removable.

Having consulted Don who agreed that we should make provision for the fitting of passengers. – Albeit not that many due to the decline of passengers using the line in Don’s modelled period. I was still mulling over various ways of fixing the roof when I realised that the roof ends don’t quite match the profile of the ends of the coach. This is due to the way that Ian makes them by vacuum forming. When I say don’t quite fit I am sure that the discrepancy will be taken up by gluing the roofs on as originally planned. But if I attempted to screw them on in any way, I would be left with an unsightly gap at either end.

A bit more head scratching and looking at the way that windows fit I decided that I could make it so that the windows cannot be dislodged by handling (which was another fear of gluing the roof on) and that if I fitted some passengers before gluing the roof down, it would mean that Don didn’t need to gain access to do it later.

I had some Slaters seated passengers to hand and they provided a welcome distraction and rekindling of interest,which I have to confess due to pressures at work was waning a little.

While the painting of said passengers (particularly the faces) isn’t as good as some, I am pleased with how they have come out and they will certainly pass muster inside the gloomy interior of the coach once matt varnished.

If you wonder why they are sat above the box instead of on it, that’s because I have inserted a length of plastic rod to enable me to old them while painting and and it will help in making them securely fastened to the seats when fitted.

I got a little more done on the All 3rd this weekend. – Sole bars, footsteps, battery boxes and queen posts all got fitted. I also did a bit more work on fitting the roof of the BG but there’s nothing really to see. I also got the mounting brackets fitted on the dynamo but I forgot to bring it home for photos (not that it looks any different to the one that I did for the BG to be fair).

In between building the Kirk coaches I have also been assembling the other exNBR bogie CCT. This one will be finished in LNER livery for my own stock.

In NBR and LNER days the side panels were all half beaded this has been added using 0.8mm half round Plastruct strip.

Although I will be making the sole bars from plastruct strip they are too long to make it out of one length so it will need to be joined.

In order that this isn’t visible on the finished model I plan to draw up and cut some 10 thou overlays. Which I plan to rivet in the same manner as the tar tank. This is in the hope that it will save me from drilling, cutting and inserting the many stubs of rod that would otherwise make up the multitude of bolt/rivet heads visible on the sole bars.

Another session last night brought the tender a little nearer to completion.

I managed to get all the whitemetal castings soldered on. I still haven’t decided whether to fit the small steps at either side of the coal chute or not the jury is still out.

I haven’t soldered the coal space/tender front in yet because I want to be able to get at the hand rails, lamp irons etc from the back before I do, then the last job [s]will[/s] should be making the corners for the flares. 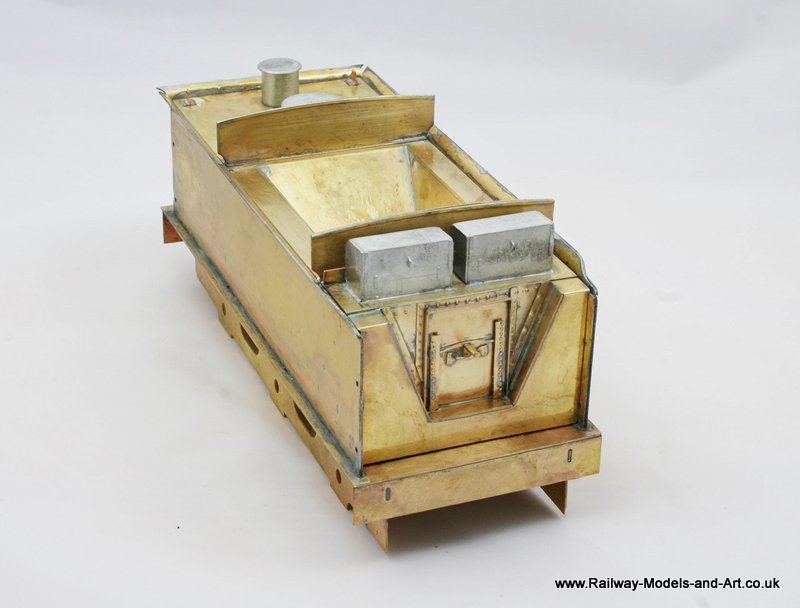 Yesterday having cut short a long weekend up north by yours truly forgetting to take his medication along I looked more closely at the brake and water scoop standards. I had more dialogue on RMweb with MikeMeg on the subject last week and he had remade the 4mm versions. I thought initially that although slightly on the fine side that the castings looked usable. – By fine they are quite slender in appearance whereas the photo posted earlier show them to be quite chunky, especially where the mounting pieces.

These are the castings provided.

The problem came when testing them against the tender front (stuck in place temporarily with bluetac).

Despite my cutting them off the sprue with as much length as possible, they are short in the column length

I couldn’t see any immediate way of extending the column* A better person than me might have been able cut it of and drill out the fixing brackets but they looked a bit on the fine side for me to be confident that I could achieve it so I decided to have a go at making some replacements.

Now I have to be honest at this point and say that this really became a test exercise to see what I could achieve with my Proxxon mini pillar drill with the X-Y table attachment. I have been looking for something to try it out in anger, having only drilled out 4 buffer stocks since I got it at Christmas.

They took me all day to make but I really enjoyed it and I have parts roughed out to make a couple more for a build for myself at some point. to give an idea of scale/chunkiness the new columns are made from 1.6mm rod.

*Thinking about it afterwards I could possibly have joined an extension piece onto the castings where they go through the wooden floor extension that’s shown on the photo of the tender front.